THE FAM appeals committee decided to uplift Kelantan coach B.Sathianathan suspension but it is only till the end of the Malaysia Cup final.

After the Malaysia Cup the committee will sit once again to deliberate on the issue and then make a final decision.

The return of Sathianathan will inspire the red warriors to win the Malaysia Cup and but then again his future is not certian, but for now the former Negri Sembilan player would like to focus in winning the prestigious cup. 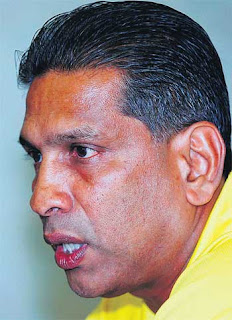 FORMER national coach and Kelantan Coach B.Sathianathan has been suspended for six months for making a statement in the papers about a particular match.

"Today we have an important match and I was informed by FAM that I been suspended for six months, this is very unfair, if they wanted to suspend me they could have waited for Malaysia Cup to end." said the former national coach.

It is learnt that KAFA President Tan Sri Annuar Musa will make an official protest against this decision that is deemed to be utterly unfair.
Posted by CHRISTOPHER RAJ at 10:51 AM 12 comments:

WELCOME ON BOARD DATO YASSIN

FORMER Sports Ministry KSU, Datuk Yassin Salleh has been appointed as the Sports Commissioner. The very well known KSU who is known for his firmness will report to work in November.
Welcome on board Sir, a lot of mess that needs to be cleaned up!

Selangor suffered its second embarrassing loss in a matter of two days when Singapore went on a goal feast at the Shah Alam Stadium to clinch the Sultan Selangor Cup with a 6-0 victory.Singapore, fielding a number of foreigners, were a class above Selangor, who were still smarting from a 0-3 defeat to Kelantan in a Malaysia Cup quarterfinal match Friday.

The Singaporeans showed their prowess in the very first minute of the match when skipper Aleksandar Duric opened accounts with a splendid header before another imported player Mendy Frederic struck a brace in the 10th and 43rd minutes to make it 3-0 by half time.Yet another nationalized Singaporean import Ivan Jerkovic doused any hopes of a Selangor fight back when he added the fourth a minute after the break and Juma'at made it 5-0 in the 76th minute.

Duric capped a perfect night for the Singaporeans by inflicting the biggest defeat to Selangor in the series, when he made it 6-0 just minutes before the final whistle to ensure the cup remained in their possession for another year after having won it last year.

The only consolation for the fans was the 1-0 win by the Selangor Veteran side which beat Singapore veterans prior to the main match.

Former international Shahrin Majid showed that he still had the killer instinct when he struck the winner in the 38th minute.Last year, Selangor lost the veteran match 1-4.

Sultan Selangor Sultan Sharafuddin Idris Shah gave away the prizes to winners while the fans were entertained by Jamal Abdillah, David Arumugam and Francesca Peter.
Posted by CHRISTOPHER RAJ at 12:20 PM No comments: 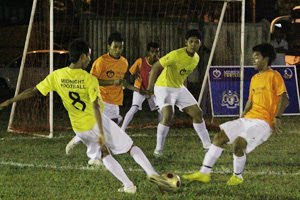 The Midnight Football participants are glad that they have joined the youth benefiting programme by AFC and feel that it is helping them become better persons.

Mohd Faris Mohd Rashid, 16, said he had been afraid of not being chosen to join the programme.
“I and four class mates from Taman Kosas Secondary School went to apply to join during recruitment. I was hoping of getting selected because I heard a lot of people were also applying.

“Plus, I hoped I would have had all my four school mates put in the same team as me. But this turned out not to be the case later

“But I’m proud to have been selected to join because this programme, being organised by AFC, is a prestigious event. I aim to become more self confident and contributing to society through this project,” he said on Midnight Football’s match day two on October 9, in Cheras, here in Malaysia’s capital

Mohd Azhar Yahya said despite his reservation at the start of the project, he is now happy to be making new friends.

“AFC is doing a good job in helping us make new friends through football. Before this, I felt awkward, but now, not anymore.

“I even scored a goal today, thanks to a pass from a team mate who was a complete stranger back when we formed the team.

Sivanathan Shendendren said he is learning well to be a leader by being skipper of his Team Honesty.

“Being a good leader does not mean your mates have to listen to you only. It also entails you the leader listening to your people.

“This way, I don’t have to control every action of my team mates. They govern themselves based on criteria and strategies we have agreed on as taught to us by our coach.

“It’s so great! I learn not to be a controlling, but an empowering leader. I’m leveraging on the creativity and hearts and minds of my players – something a controlling leader can’t do.

“Our coach Shan from FAM (Football Association Malaysia) is really something!” exclaimed the 18 year-old just after a match.

Sivananthan Shendendren learned to be an effective leader by being team skipper.

Midnight Football is a pathfinding project of AFC which aims at helping marginalised youth off the street, the first such a project in Asia and Malaysia.

The eight-month project aspires to use football as the stepping stone to educational, character building, entrepreneurial skills and community awareness related programmes.

AFC has chosen Malaysia as the first Member Association (MA) for the project and aspires that it will be emulated by other MAs.
Posted by CHRISTOPHER RAJ at 1:58 PM 1 comment:

WE RUN KL A SUCCESS 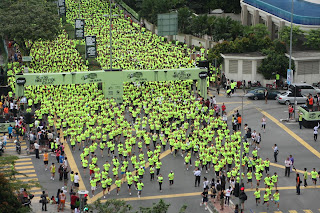 Nike Malaysia today flagged off its inaugural Nike City 10K Kuala Lumpur run that saw more than 8,000 runners racing through the streets of Kuala Lumpur in their bid to be crowned champions of the city. The city race was an immense success in its aim of inculcating the passion for running amongst local youths with over 63% of total runners registering for the Under-25 category.

Runners gathered as early as 6am at the KLCC Outdoor Car Park as they waited eagerly for the flag-off at 7.15am for both 5km and 10km routes. Through the course, runners conquered the city’s well known roads such as Jalan Bukit Bintang and Jalan P. Ramlee, and the Ampang-KL Elevated Highway (AKLEH) that provided a scenic backdrop of the city’s impressive skyline to those running the 10km route.

A host of local celebrities and bloggers including Adi Fashla of ERA FM, Ean Nasrun of Hitz.FM, Sarah Lian, Niki Cheong, Jason Goh and Arafah were amongst the runners who were seen gearing up at the start line. Hitz.FM morning crew DJ was on hand to spur runners on as they crossed the finish line.

“The response and energy today were truly inspiring and clearly demonstrated the passion of our runners and the growth of the running community. Nike Malaysia will continue to support the local running scene by providing not only avenues such as the run today but also knowledge and training to further motivate young runners and to encourage more Malaysians to embrace running,” said Menaha Nadaraja, Country Marketing Manager, Nike Malaysia.

In line with the race’s objective of encouraging young runners to participate in the Nike City 10K Kuala Lumpur, Nike Malaysia organized a School Team Challenge and a University Team Challenge that saw the winning institution walk away with RM10, 000.00 cash, RM10, 000.00 Nike voucher and trophy for each category.

Posted by CHRISTOPHER RAJ at 5:07 PM No comments:

Qatar, who defeated Iraq 1-0 in the final of the last edition of the Asian Games held in their own backyard, were placed in Group D alongside Kuwait, India and Singapore in the draw held on Thursday.

Hosts China were slotted in Group A alongwith Malaysia, Kyrgyzstan and Japan, while Thailand, Maldives, Oman and Pakistan are in Group F. Group B includes Iran, Vietnam, Bahrain and Turkmenistan while Group C comprise of Korea Republic, Palestine, Jordan and DPR Korea. Uzbekistan, UAE, Hong Kong and Bangladesh form Group E. The top two teams from each group and the four best third-placed teams will qualify for the Round of 16.

Seven teams will compete for the laurels in the women’s event with defending champions DPR Korea facing last edition’s runners-up Japan and Thailand in Group B while China, Korea Republic, Vietnam and Jordan form Group A. The top two teams from each group will qualify for the semi-finals. The women’s event will be played from November 14 to 23.

"Asia is the largest and most diverse continent and football plays a major role in uniting us," said Prince Ali, 34. "My goal is to restore the values of fair play – a key FIFA principle - and build a new equilibrium in which all Asian countries, whether big or small, rich or poor will benefit."

"I'm eager to help bring change in representing Asia within FIFA," said Prince Ali, who plans to reveal new ideas aimed at rejuvenating the Federation's Asian representation. "I want to reach out to meet the aspirations of the tens of millions of young sports fans in the region who want to see their Asian players take their rightful place on the world football stage."

To achieve this, Prince Ali says he's committed to seeking out best ideas across the region for improving the Asian continent's position within FIFA.

Prince Ali, who has been dubbed 'the prince of youth' is one of the youngest candidates in FIFA's history. He has more than a decade of achievements in football and a history of uniting national teams, rising above regional politics. In 2001, he established the West Asian Football Federation, doubling the number of members, uniting the region's football confederations and organizing and expanding international championships for men and women.

Under his leadership, the Jordan National Women's team has dramatically risen in the latest FIFA women's world ranking. Prince Ali has also focused on invigorating Jordan's youth teams and strengthening soccer community centers across the country to promote the unifying, educational and cultural values of football.

In addition to his passion for the sport, Prince Ali brings to the candidacy more than ten years of experience in the international arena as well as an unparalleled network of worldwide connections. His dynamism and integrity have earned him a close relationship with international football officials as well as players on the field.

Prince Ali has consulted with a number of football associations and has received overwhelming support for his bid as FIFA vice-president. "I am grateful to all the leaders in the football world for their support and cooperation," said Prince Ali.

Respected for his candor and straightforward approach, Prince Ali is eager to work with and consult all Asian football organizations in his bid to represent a united continent.
Posted by CHRISTOPHER RAJ at 1:59 PM No comments:

CHRISTOPHER RAJ
"Jai Ho" means "may victory be yours."